If on a beautiful summer afternoon in Groton you see a familiar scene, but with a twist: nuclear family of four strolls down Hollis Street-with alpacas. And later, on Common St., you see a young girl riding in a little cart-pulled by miniature donkeys, there is nothing wrong with your eyes. It's just that the Sullivan family has come to Groton.

John and Shelly Sullivan moved here two years ago from Harvard with son Patrick, now 10, and daughter Caroline, 11, both enrolled in Groton-Dunstable schools and sports. After renting for a year, they fulfilled a dream and bought the house at 65 Common St. where, since March, they have been the proud owners of two miniature donkeys and seven alpacas.

Grotonfest will be a coming out party of sorts for two of the alpacas, yearling girls Polly and Fiona. It will also be opening day for a new business in Groton, a shop at the farm, both named Luina Greine, (pronounced "leena grain") which means "sunset" in Gaelic. The shop will sell products made from the alpacas magnificent fur, prized for eons in Peru for its softness, warmth and warm natural colors. "So soft and warm," says Shelly, "it trumps wool." To launch the business, she will sell alpaca goods at Grotonfest. The family is part of a growing movement to make alpacas naturalized Americans, part of the local farmscape.

Shelly's goal is to open the shop at the farm either the last weekend in September or the first in October. It will be open weekends and by appointment through the holidays, offering sox, mittens, gloves, hats, and scarves made by artisans in the Massachusetts Fiber Co-op in Fall River, where the Sullivans will bring their wool once a year, in return for which they get credit toward the finished goods.

A likely-to-be popular attraction at the shop will be at least two alpacas at a time, in a little pen. The donkeys and all of the alpacas live in the big barn on the property, and graze in a fenced enclosure. There are seven of the lovely creatures in all, two mamas and five young 'uns: two very young boys and three 12-to-18-month-old girls.

"We've never done anything like this before," John Sullivan said. When the family lived in Harvard, he said, they were smitten by the alpacas on a neighbor's farm, and decided to find an appropriate spot to have their own when they moved to Groton. "We've always known we wanted to have a farm," said Shelly. They decided the time was right because the kids were old enough, they fell in love with the farm in Groton, and they had already fallen in love with alpacas. "So we just dove in," she said.

Why walk them on Hollis St.? Practicing going to Grotonfest, of course. 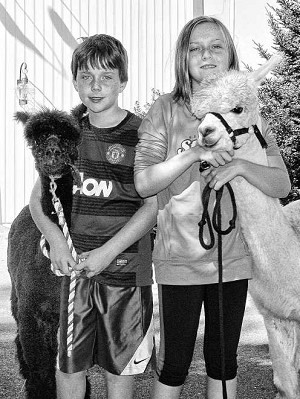