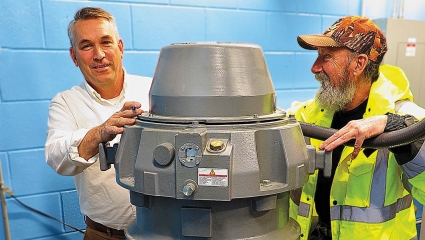 Water Superintendent Tom Orcutt [left] with Water Technician George Brackett proudly showing off one of the new, highly efficient, variable speed pumps [looking suspiciously like R-2/D-2] installed at Whitney Well #1, a major factor in the Water Depatment’s successful implmentation of a plan leading to big savings for the town.

To keep up with Groton’s explosive population growth starting in the late 1980s, Groton Water Department added two new wells on the shore of Whitney Pond, both tapping into the same aquifer. By 2016-2017, a long drought severely taxed the capabilities of the two wells, creating a potential water capacity problem.

If the drought had continued, new sources of water would have been needed at a cost of about of $2 to $3 million each for well sites at Unkety Brook on Chicopee Row and the Shattuck well site on Hemlock Park Drive. Both sites are already protected and permitted for future development.

While contemplating the need to approach Town Meeting for such a huge sum, Water Superintendent Tom Orcutt got a fortuitous call from the state DEP [State Department of Environmental Protection] offering a grant to increase Water Department energy efficiency and reduce the department’s carbon footprint. Of course, Orcutt jumped at the chance to apply for the grant. The Baker-Polito Administration through the Clean Energy Results Program with support from the Department of Energy Resources awarded nearly $3 million in grants to Water and Wastewater Facilities  for energy renewables and efficiencies in the Commonwealth.

But DEP’s grant proposal also sparked creative rethinking of the capacity problem at the two Whitney wells. Groton’s grant application of $83,295 was successful and was awarded in spring 2108 and ultimately lead to a solution capturing significant energy savings, lower operating costs and – most importantly – a 40 percent increase of pumping capacity, not to mention improved water quality, ultimately allowing the town to postpone spending $2-$3 million for new well development for at least five years.

Water Superintendent Orcutt explained that the initial barrier to a solution was DEP’s ban on withdrawing water from both Whiney wells simultaneously because they feared the aquifer would be depleted. Eventually DEP approved simultaneous pumping from both wells provided that the daily withdrawal rate was not exceeded.

Orcutt said, “Essentially, we are putting two ‘straws’ into one aquifer, instead of one, and pumping from both ‘straws’ at a reduced rate. This approach is good for the aquifer, allows for greater capacity as well as increasing water quality.”

Asked how water quality could have improved, Orcutt said, “We attribute that to the two straw theory. We’re pumping less intensively from two sources, even though they are close by, instead of pumping off the bottom of the barrel from one straw. We have seen a noticeable change increase in water quality based on our monthly monitoring .

Tom Orcutt explained, “We ran a few tests in the late summer of 2017 during the attempted recovery period of the wells and, with our engineers, decided that it could be done. So we embarked on engineering drawings and put it out to bid.”

At Fall Town Meeting 2017, the Water Department asked for and received $400,000 for the project, with the final contract coming in at $350,000. With the money, the Water Department downsized the pumps and motors at the two well heads [the two straws], while also installing efficient variable-frequency “drive” motors. To further increase efficiency and potentially reduce any overtime costs, a SCADA System was installed, allowing operators to monitor and control pumps remotely via laptop. With a well-justified satisfaction, Orcutt said, “And now our pumping capability is 40 percent better.”

The Water Department is able to shut off the pumps and still provide service to the town because water is pumped to a one million gallon tank on Chestnut Hill that feeds the water mains by gravity.

Orcutt said, “We know when a peak is coming because we get notifications from GELD. Typically we have to shut off for about two hours. That saves the Light Department from hitting peak electrical demands which saves money for the entire community.”  Superintendent Orcutt said, “It’s a win-win for them and it’s a win-win for us. Both GELD and the Water Department are working closely together to help the town.”

Groton’s original and primary well is on the shore of Baddacook Pond. A water treatment plant, including two filtration vessels was installed there in 2005 to remove naturally-occurring iron and manganese from the water.  The project included adding electronic controls to better monitor changing water quality and resource demands. In 2016 Water Commissioners vigorously fought off multiple attempts to apply herbicides to Baddacook Pond, potentially contaminating Groton’s principal source of potable water. 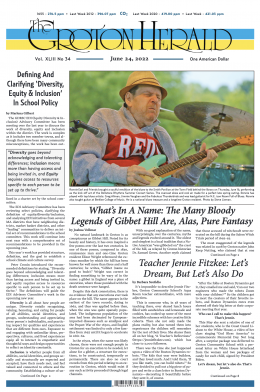