The club urges all to come visit their pie booth at Grotonfest this weekend!

This mother and her daughter brought flowers to the Christine Hanson Memorial Garden on September 11.  Christine, who was two years old when she was killed in the attack on the twin towers, was the youngest victim of the terrorist attack that day. This mother said she has been visiting the memorial since her daughter was born. Photo by Linda Loren – Groton Garden Club

Troop 3 Groton kicked off the new Scouting year this past weekend building a kiosk for an Eagle project at the Masspoag boat ramp at the Groton / Tyngsboro border. Courtesy photo

College of the Holy Cross

College of the Holy Cross congratulates the 904 new Crusaders who are starting at the College in fall 2022. The following local students will be part of the Class of 2026: Haly Buchmann of Dunstable, Abigail Linskey of Groton, and Cullan McHugh of Groton.

Saturday, August 20, when 35 boaters and property owners on Lost Lake and Knops Pond got together for some creative fun, the game was on! Boaters were the players and dock-masters were the dealers. Besides the goal to meet and greet, there was an “ante poker pot” to be split between the winning high hand and low hand. Everyone who played the game became a winner of new friends and familiarity with unexplored nooks and crannies of our beautiful lake and pond.

Many thanks are due to all who participated making this a requested annual event, and especially to the two winners who generously donated to the GLA coffers.

Nashoba Valley Technical High School welcomed the Class of 2026 at Freshman Orientation on August 29. Thirty-three juniors served as mentors for the new students, conducting tours of the school and helping to acclimate them to the campus. The mentors include Dunstable resident Zachary Cover and Groton resident Nate Dunn. In the photo, Zachary Cover, a junior from Dunstable, center, shows the tool cage inside the Automotive Collision Repair/Refinishing program to freshmen Trevor Chamberlain of Chelmsford and James Conway of Groton during Freshman Orientation at Nashoba Tech. 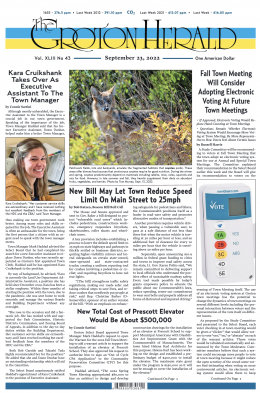